What impact can you make with a law degree?

Diverse voices from the Loyola University New Orleans College of Law share how they plan to put their law degree to work, focusing on important social justice issues like public interest law, criminal justice reform, and more. Read their stories and explore resources unique to Loyola’s College of Law that can help you realize your career goals. 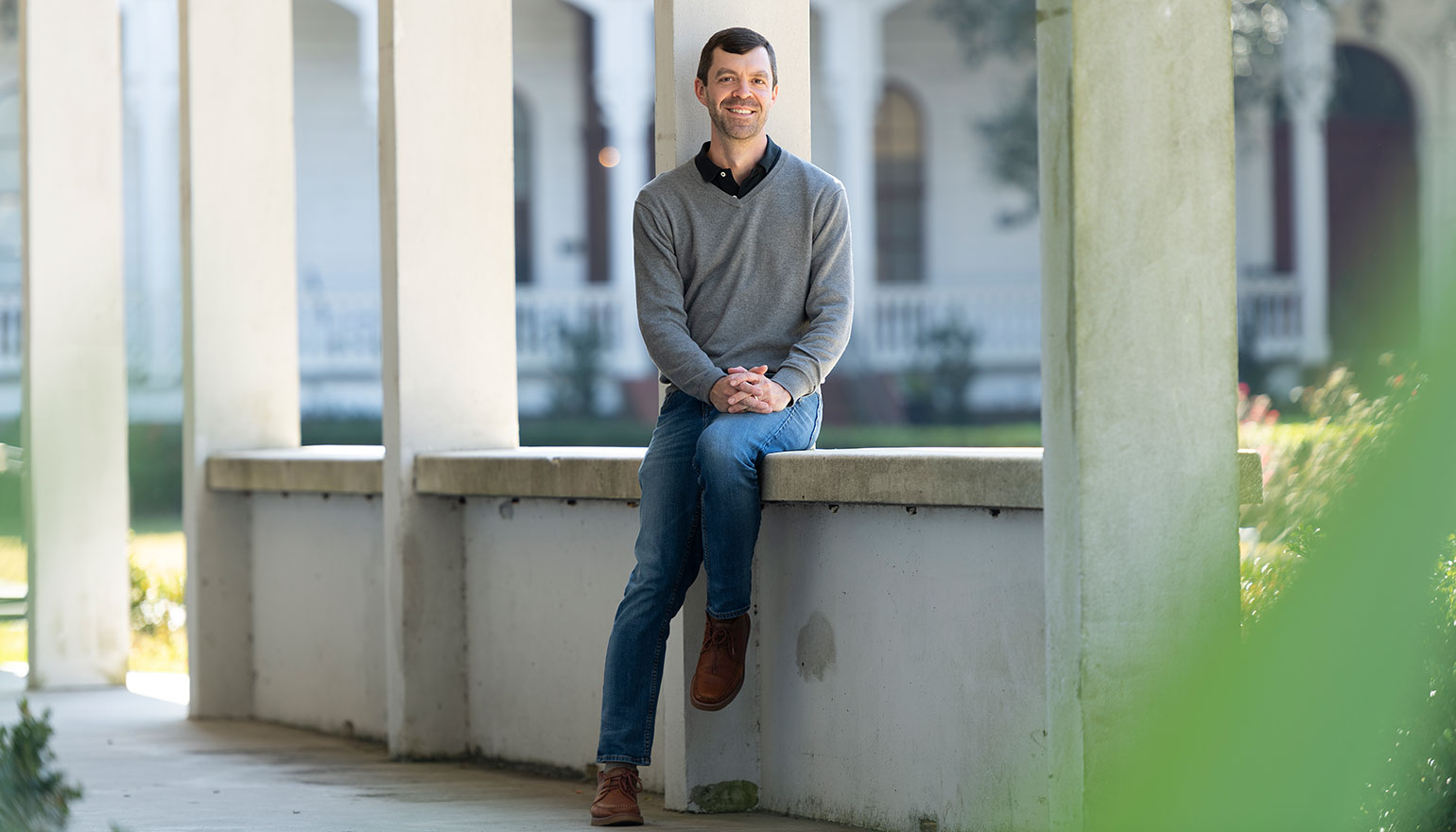 For Peter Finney, the decision to go to Loyola Law was clear. As a New Orleans native and former Catholic priest, Loyola’s Jesuit mission and commitment to social justice align with Finney’s goals.

“A law school at a Catholic university committed to service in our city made Loyola an easy choice,” said Finney.

Finney served as a Catholic priest in the Archdiocese of New Orleans for 10 years, connecting him to people from all walks of life. During this time, Finney saw the challenges facing his community firsthand and felt called to make a difference.

“When I left the priesthood, I knew I wanted to pursue a career that, in some way, could respond to local needs for justice,” said Finney.

Although Finney is still keeping his options open after graduation, he has found criminal justice particularly appealing. But the most rewarding aspect of his time at Loyola Law so far has been the tremendous mentors and teachers he’s met along the way.

“Loyola has introduced me to so many gifted and caring practitioners,” said Finney. “The encouragement to get involved in the legal community has been tremendously helpful.”

Through the Gillis Long Poverty Law Center summer internship program, as well as the comprehensive network of externship programs, Finney has gained relevant experience and built a wealth of professional connections during his time at the College of Law. He hopes to build on this experience to make a meaningful impact in New Orleans upon graduation.

If you’re interested in a law degree with an emphasis on social justice, find out how to apply to Loyola College of Law. Explore our virtual open house for a preview of our campus and immersive video content from faculty and current students. 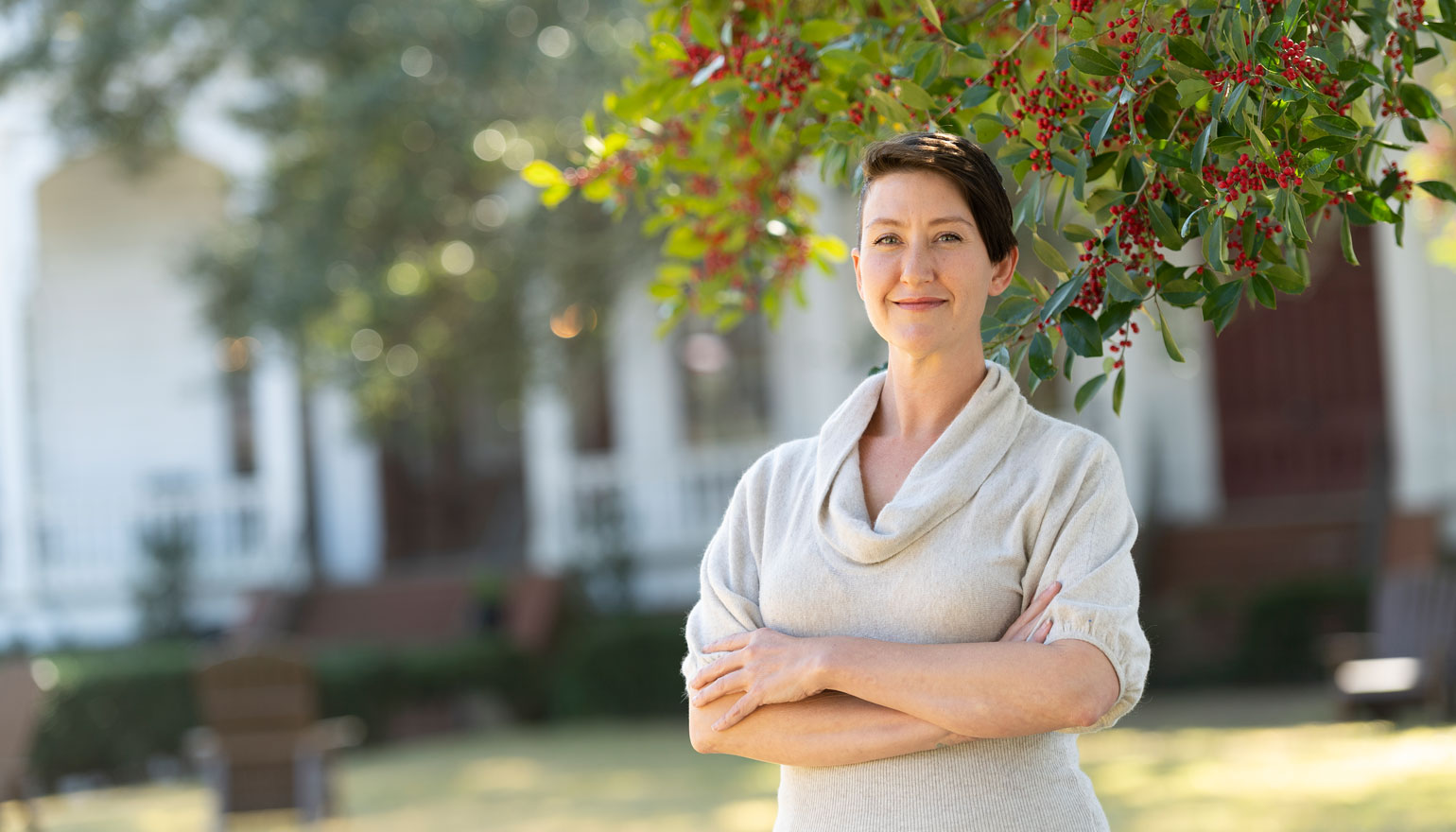 Renea Pellegrino is a certified yoga instructor, has traveled the world from India to Japan to Mexico, and was named the 2017 Best Bartender in New Orleans by Where Y’At Magazine. Now, she’s focused on achieving her next goal: earning her law degree from Loyola University New Orleans.

Pellegrino graduated with her B.S. in Urban Studies in Planning from the University of New Orleans with a focus on Fair Housing and Community Development. Combined with her impressive life experience and academic background, Pellegrino plans to apply her law degree to public interest work after graduation.

“I was drawn to Loyola because of the university’s dedication to communities through education, justice, and service,” said Pellegrino. “I am dedicating my degree to public interest work. My goal for my time at Loyola is to gain as much knowledge in the field as possible via experiential learning.”

“Law shapes society and affects our lives daily, and I desire to make societal changes,” said Pellegrino. “I believe that our current system is designed to be opportunistic for a select few, and I want to aid in leveling the playing field to where all people have equal access to basic rights and opportunities.”

Inspired to take action, Pellegrino knew that Loyola Law was the right fit for her when she met with the faculty and learned that she would be joining a community with a shared mission and dedication to helping others. By having one-on-one conversations with faculty members, she was able to get the answers she needed early in the application process.

“Though the workload can seem daunting at times, I enjoy the subject matter, learning amongst a supportive community, and earning a degree that will help me further my goals,” said Pellegrino. 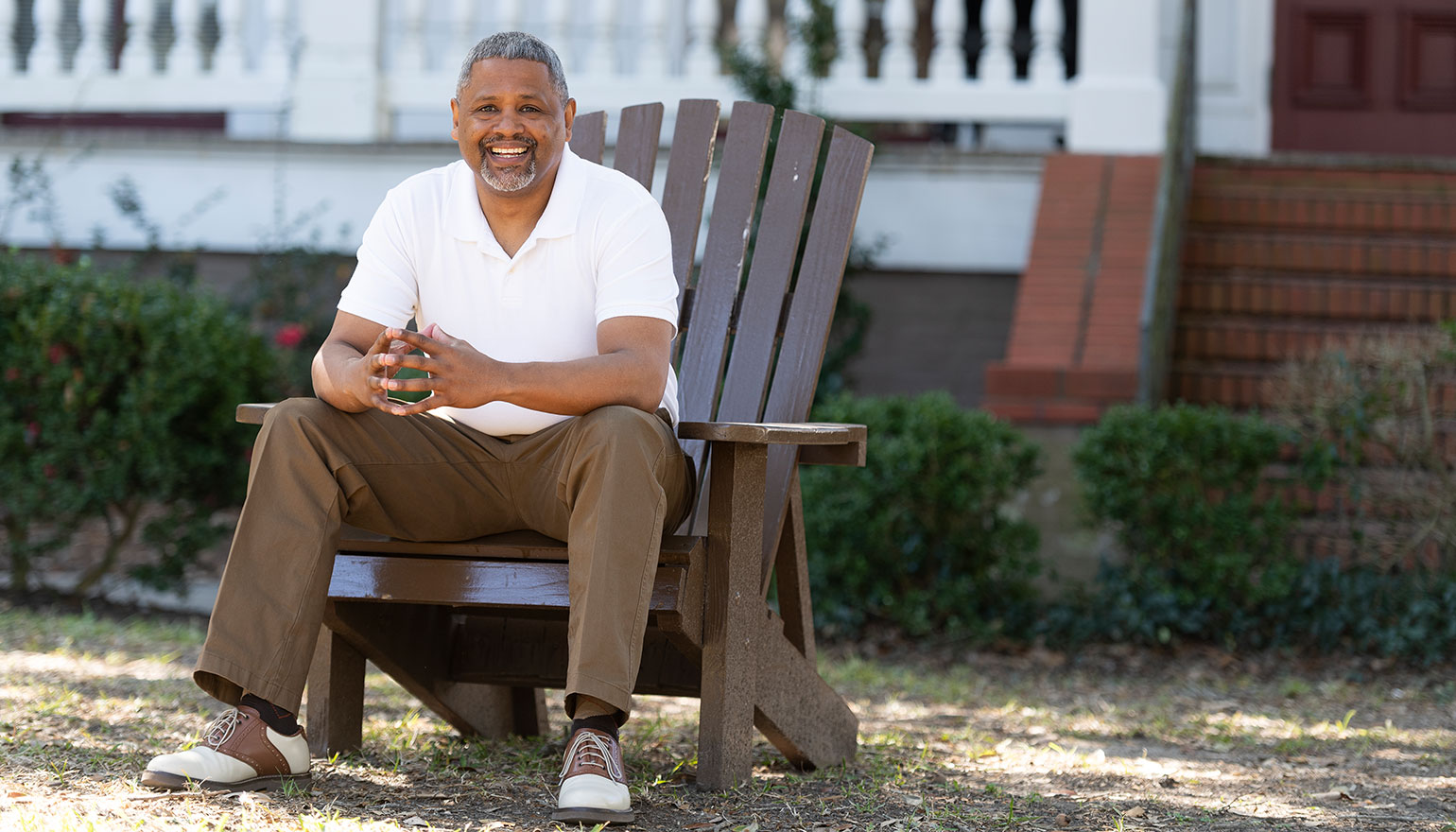 Alex Bellow joins the College of Law with a wealth of professional and life experiences fueling his passion for the law. As the owner of an insurance agency for more than a decade and a senior pastor at a local church for more than two decades, he’s experienced the justice system from many different perspectives.

“In my work as a pastor, I have had to come alongside some of the parishioners as they interacted with the justice system. My observations have led me to conclude justice is not equal for all and I want to work to change that,” said Bellow.

A man of faith, Bellow felt connected to Loyola as a Jesuit institution with a focus on social justice, ethical decision-making, and service to others. Bellow plans to combine his knowledge and connections as a pastor with his new knowledge of the legal system to help create systemic changes that benefit those who are most in need of support.

Although Bellow made the decision to go to law school later in his life, he’s been moved by the commitment of his fellow students who share his motivations to make a positive impact in the world.

“The most rewarding part of my time so far is seeing so many young people, my daughter's age, so committed to doing the hard work of learning the law so they can do substantive work to bring about equality in this country,” said Bellow.

With resources like Academic Success and one-on-one mentorship with professors, Bellow has found a community at Loyola Law to support his goals and stay engaged. Even as he juggles the responsibilities of work, life, and family, the support team at Loyola reminds Bellow of the bigger-picture motivations that drew him to law school.

“As a non-traditional student, law school is a lot to manage along with my family responsibilities. Professor Tufts has helped me manage the academic and emotional challenges that come with my dynamic,” said Bellow.

If you’re a working professional like Bellow and you’re interested in earning your law degree, learn more about our J.D. program with options for full-time and part-time learners. Request information to speak with a member of our admissions team about your individual goals! 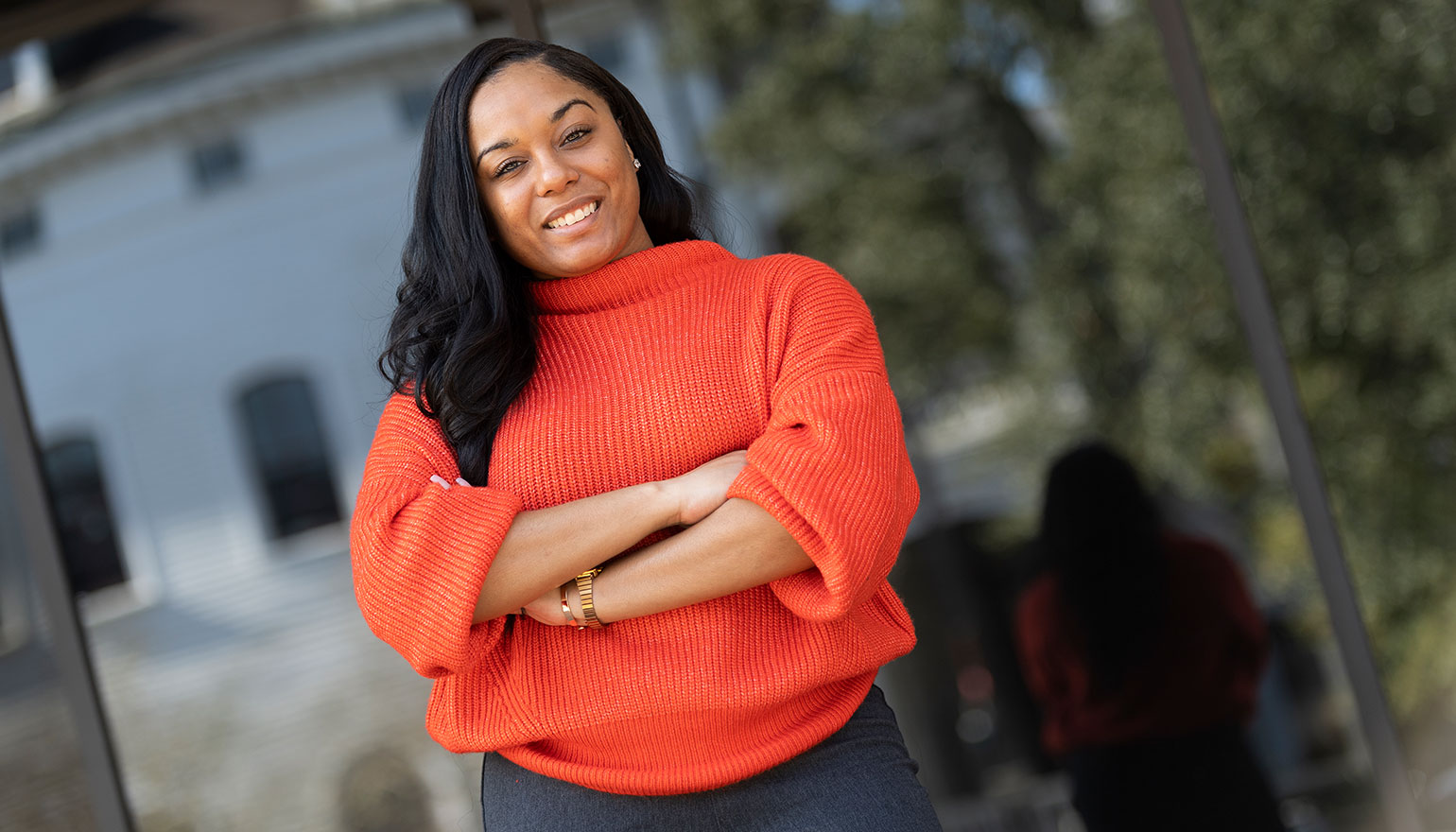 At Loyola Law, we know that great lawyers come from all backgrounds, industries, and experiences. Ashley Brown sets a great example. After spending the last seven years traveling the world as a flight attendant, she’s ready to write her next chapter of life as a lawyer.

“I chose law school because I truly believe that the information learned in law school will be valuable in every aspect of my life,” said Brown. “The quote, ‘all roads lead to a lawyer,’ has been my inspiration.”

When it came time to choose a law school, Brown felt right at home on her first visit to Loyola. With small class sizes and a supportive community of faculty, staff, and students, Loyola Law takes an individualized approach to each student’s legal education.

“The faculty and staff were so welcoming and encouraging. This is what drew me to Loyola specifically,” said Brown.

“Assistance from the Academic Success Program has been extremely impactful during my time at Loyola Law. This program has helped me with essay writing, test taking, and stress management,” said Brown.

Brown has become very involved at Loyola during her time in law school. One of her highlights has been getting accepted into the Litigation and Technology section of the Stuart H. Smith Law Clinic and Center for Social Justice. Ranked no. 32 in the nation for clinical education by U.S. News and World Report, the Law Clinic allows students the opportunity to be sworn into practice law in their third year of law school, representing real clients in need under the supervision of faculty.

“This entire experience at Loyola Law has been challenging but worth it,” said Brown. “During this unique experience of law school I have endured a pandemic and natural disasters. Throughout everything, the faculty and staff have supported me and treated me as family. I am forever thankful and I hope to lead as an inspiration for those who want to attend law school in the future.”

Find out if Loyola Law could be the right fit for you, too. Schedule a visit to meet the faculty and staff who will support and guide you through law school.